Over the past two years—the two years that I was very, very, single—I learned that there is a certain romance in detachment; in walking down the street, your eyes itchy from too much black makeup, caked on your face for too long, with one of your boots untied and a snag in your nylons; in being the lone wolf of a girl with curls turned to tangles and a headache over her left eye like a wound that only she can see.

It was on these mornings—the mornings after girls’ nights gone awry (because they always went awry)—that I felt like a ghost walking back to myself; a crescent moon of a smile waxing at the corners of my mouth because I had a new story to tell…

The Story of 9 Non-Romances + 1 Romance

A semester later, we started talking, and that workshop day was one of the first things we ever talked about: “When did you realize you liked me?” I asked, and he said: “Well, I always kind of noticed you—but the day we workshopped your story and you stood up for yourself, that was the first time I had ever really seen you be serious. I liked it.”

After The Sexist criticized my male character from a misogynistic point of view by saying things like: “No guy would ever pay that much attention to a girl’s face”—seriously! He said that!—I gave the class my two cents: “I don’t think my character’s masculinity is the issue here. It’s not my job to write him in a way that makes you feel comfortable. However, it is my job to make him complicated—which I did.” Then I remember looking at the floor, because I was genuinely disappointed in everyone. I said: “I’m very open to criticism that’s constructive, but I’m not going to change my male character.” The whole room became tense. I felt like a bitch saying it because The Sexist looked kind of ashamed…it was awkward, but I knew I would regret it if I didn’t say it.

He said: “I think you’re likeable.”

Of course, when I responded to The Sexist, the last thing on my mind was maintaining likeability. I knew a majority of the guys were crossing their legs to me at that point. Probably thinking that I should lighten up, be nice, take a hint; just accept that I can’t write men—whatever. But the thing is, when someone attacks my writing, and my characters, and my stories in a way that I find unfair and irrelevant and especially sexist, it feels like they’re attacking my baby.

My creative work is my baby.

I don’t give a fuck about being appealing to men when it comes to my writing. I don’t care about sexy, or about being charming, or sweet. I become a mother Bear—like, step the fuck away—because, in these moments, all I care about is survival; about being the fittest. And if you’re challenging my ability to be exactly that—well, I hope my response makes you uncomfortable.

But, here’s the thing about Michael: He decided he liked me in a moment when most guys were deciding that they didn’t like me, or at least that they could never date me.

He liked me the moment I demonstrated passion, dignity, assertion…a number of things that our society deems unfeminine, and instead of being threatened by it, he was interested.

This might be bold, but I think that’s a rarity among modern men. I think it’s rare to find a guy who whole-heartedly wants a complicated individual for a girlfriend; to find someone who allows you to be a whole person in his presence and doesn’t think there’s something wrong with you because of it.

I asked Michael why he liked me and he said: “Because you’re funny.”

To me, that’s the ultimate compliment, and what makes it even better is that Michael likes me even when I’m not being funny. He likes me when I’m being serious too.

And I like him because he gets writing and he gets literature—but in a way that runs deeper than a lot of our idiot classmates.

I like him because he’s a good listener; because he’s humble; because he loves animals so much that he saves turtles from the street despite the fact that they might snap at him.

I like Michael because he is already good, and he still wants to be better…that’s a rarity among both modern men and women, I think.

There is a certain amount of romance in detachment; in being the lone wolf of a girl hunting down stories; experiences. But, there is also romance in the mundane reality that is being in a relationship, especially when the relationship is right.

And with Michael it’s not like: OH MY GOD THIS IS MY SOULMATE MY BETTER HALF MY EVERYTHING MY BAE ALL RELATIONSHIP GOALS ARE MET RAWWWWWWR! 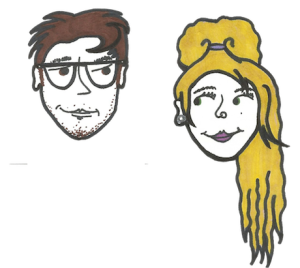 I’m an aspiring writer living in western NY. I received my B.A. in creative writing from Buffalo State College in the spring of 2015. My work has either appeared, or is upcoming, in Elm Leaves Journal, the It’s Not Personal blog for Bust Magazine, Swamp Ape Review, and Coffin Bell. This blog is mostly an exploration in feminism, cultural criticism, and how I relate to American Society as a millennial woman. View all posts by Cat Olson