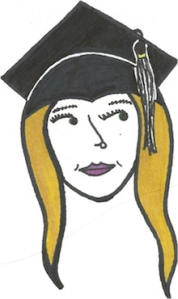 confederate flags, abandoned swing sets, and Halloween decorations in June; down to a place where romance is: Do you remember that time we made out in the CVS parking lot?

Jamestown is a pretty hopeless place. My first semester away at college I wrote an essay about the city, and the premise of it was basically like: If you’re not on crack then you’re doing OK and Lucille Ball is our savior. Everything I wrote was true, and most of my classmates said: No way. They couldn’t believe such a hellhole existed. I even remember my professor saying, “You know, some of the images you’ve created are things you’d see in a third world country.” And in response I said, “Yeah, exactly.”

The very first day of that same semester, another professor, whose class I would drop immediately, asked where I was from and I answered, “Jamestown.” Then he said, “Congratulations!” And I said, “What?” Because it’s not a word you’re supposed to hear the very first day of college. Then he explained, “You got out.”

And now I’m laughing hysterically because I’m back—again—and if we’re being completely honest, I never really ‘got out’.

This time around, a long island iced tea with my best friend is on the other side of the rabbit hole; sitting on the same stools, in the same bar, and directly across from a group of

guys—one of which I’ve probably hooked up with—all wearing the same plaid shirt, creating one annoying optical-illusion-y zebra affect of douche-bag: Is that a hot guy I see? Oh, no, that’s just a cloud of Axe body spray.

My best friend, who I’ll refer to as A, is talking about her new job. The conversation quickly transitions into how she went to some rich guy’s mansion, and how his property was covered in mating frogs: “I tried to touch one and it bit me,” she says, “I didn’t know frogs could bite!” Then she tells me Rich Guy found out about the frog bite and decided to grab his shotgun: “He shot every frog he saw, and they, like, hopped, and back flipped, and then exploded!” I suck down half of my long island in one gulp, and look at her like the emoji with the eyes that bug out before she says, “It was kind of sad, but then I got drunk and after that it was kind of funny.”

Apparently Rich Guy concluded the frog massacre with: “Nobody bites my house guest.”

For the most part I don’t realize how bizarre this conversation is. Living here has given me a high threshold for nonsense and a solid indifference to general human depravity. However, luckily, what I do realize is this: Not a whole lot has changed since I’ve left other than A got a job and there are a few less frogs in the world.

I go home and fall asleep on a bed of sheep pillows until 1 PM. Then I roll over and watch The Real World: Skeletons on Hulu for four hours straight. I’m just about to get self-conscious about the fact that I’m 23 and have never been a cast member on The Real World when my dad walks by the TV and says, “Don’t these people know there’s a war going on?” In which case, I get weirdly defensive about the millennial generation, as if I don’t totally agree with the assumption that we’re all a bunch of hedonistic pigs with dreams of getting drunk for a living. In retaliation, I say, “Do you know there’s a war going on?” Because, seriously, does any American navigate their daily life like they know a war is going on?

I shut the TV off in a huff and stomp to my room pre-teen style where I lie in a bed of kitty cats and compare Jamestown to a black hole—wait—a rabbit hole!

The thought inspires me to retrieve my copy of Lewis Carroll’s Alice’s Adventures in Wonderland from a pile of dust and glitter. I open the book to a random page, like I’m back at church camp and bible dipping for a sign that ensures I’m not going to hell. The page says: “If you drink much from a bottle marked ‘poison,’ it is almost certain to disagree with you, sooner or later.”

This was clearly a sign that I deserved a beer. So I went to the fridge and awarded myself with exactly that.

My final semester of college wasn’t my best. Prior to it, I was an A student who somehow managed to maintain an excellent status despite the fact that I used my bra as a pillow every weekend. But then, during the last few months of school, the work hard / play hard lifestyle caught up to me, and my body and my mind were like: Enough of this shit. It’s alcohol or academia.

My brain pleaded: Academia! But my physiology demanded: Alcohol! And my 3.9 GPA was history.

I walked the stage and received my bachelor’s degree with two gold chords around my neck and felt like a total phony. Then, my fellow writing majors would confront me, saying something along the lines of: Cat, we saw your Snapchat story. You were drinking beer from a dirty broom ball trophy; we’re worried about you. And my only excuse was: “Sorry guys, I’m moving back to Jamestown so…”

Anyway, my final semester was difficult for more reasons than just laziness and an extreme case of senioritis. I had a professor who was doing some pretty slimy things to me, things that were bordering on harassment. Either way, what he was doing was enough to inspire me to Google the criteria for emotional abuse.

For the next few days I wasn’t eating or sleeping because my stomach felt like it had twisted itself into a pretzel, and I was too busy questioning my ability to get shit done: Would I pass all my classes? Am I that lazy? Would I be able to crank out over 30 pages of writing in a week? Maybe I’m not as smart as I thought. But soon it occurred to me that it was utterly ridiculous for me to be questioning my ability to do these things because they were all things that I had been doing, and doing well, for the past four years.

After this realization, I made the mistake of meeting with this professor with the intention of defending myself because, for whatever reason, some strange part of me really wanted his approval and respect.

I went to his office, and the moment I walked through the door it was like he was already mad at me. I said, “Can we talk?” and he said, “I thought we already did that.” And from that point on it just got worse.

I told him I felt misunderstood and that I believed I deserved a higher grade than the one he intended to give me. He responded with, “Technically I could fail you at this point.” Then he accused me of asking for favoritism and added, “I feel like you think I have something special against you.” At which point, I started getting angry, I said, “Because you do. You do have something special against me—I don’t see you pulling any of the other students out in the hallway in the middle of class to chastise them like some naughty high schooler.” (He did that! He pulled me out of class one day in front of everyone to scold me about attendance and to essentially flat out state that he preferred my presence to any of my classmates’.)

After I brought this up, his eyes darkened and his mouth tightened. He had a look on his face like he wanted to lurch across his desk and choke me. But he didn’t. Instead he responded, “See this is why I can’t have a conversation with you. You just freak out. You completely overreact and I can’t take you seriously.”

At this point I remember getting tunnel vision—a side effect of the messy combination that is disappointment and rage.

This was a man who had no problem showing me favoritism based on the quality of my first essay, and every essay after; this was a man who had shown me favoritism until he started taking my absences personally; until his ego got hurt. Then he ripped the rug out from underneath me and tried to frame me as a narcissist. He wanted to punish me for being a woman who had the nerve to believe she deserved more than what he was willing to give her; to be respected. His disapproval for me had nothing to do with who I was as a student, and everything to do with who I am.

Of course I started crying.

Then he decided to throw some salt in the wound; he said, “You’re supposed to get out of Jamestown—not go back.” And I realized that this asshole was the same professor who congratulated me for ‘getting out’ my very first day of classes. Now here we were, in the final weeks of my college career, and while I thought I was climbing up in the world, I had been walking in circles.

I’m not unhappy about being home, I’m just misty-eyed and restless and a little lost. I re-read Alice’s Adventures in Wonderland a few days ago and interpreted it as one long metaphor for how it feels to navigate your twenties. Seriously. Alice totally embodies the problems of any twenty-something.

She falls down the rabbit hole thinking she knows everything, only to find out that she knows nothing; a logical child thrust into an illogical world of interruptions, uncertainties, and difficult beings. She progresses and then regresses—up and down, back and forth. Sometimes she drowns in her own tears, and on more than one occasion she finds herself wishing she hadn’t drank so much. Then she meets some smoking asshole caterpillar who creates a conversation that keeps going in circles, and challenges her entire being with a simple question: “Who are you?”

If there’s anything that I’ve learned in these past few months (and what I’m sure I’ll continue to learn for years to come) it’s this: Being in your twenties is a confusing and terrifying time for everyone, and there’s always going to be some conniving caterpillar of a person blowing smoke in your face and trying to throw you off track; hoping that you’ll doubt yourself and won’t become the great person that you’re capable of becoming.

When this happens, it’s important that you don’t listen. Remember it’s not true; it’s just smoke. And if the person rooting for you to fail has some kind of authority over you—start looking for loopholes. It doesn’t matter how you get to where you want to go, it doesn’t even matter if you know where you want to go. All that matters is that you eventually become someone better than the person you were the day before; that you continue to learn and grow. Sometimes this means going home for a while, other times, it means going someplace new, for many people, it means doing both. Either way, there’s no right or wrong way to do it, as long as you do it—like what John Mayer (that asshole!) said: There’s no such thing as the real world, just a lie you’ve got to rise above.

I’m an aspiring writer living in western NY. I received my B.A. in creative writing from Buffalo State College in the spring of 2015. My work has either appeared, or is upcoming, in Elm Leaves Journal, the It’s Not Personal blog for Bust Magazine, Swamp Ape Review, and Coffin Bell. This blog is mostly an exploration in feminism, cultural criticism, and how I relate to American Society as a millennial woman. View all posts by Cat Olson